Turkey should increase its exports to Indonesia, which currently total less than $300 million annually with the bilateral trade deficit around $1 billion, the Turkish trade minister said Monday.

"We should not post this deficit. We should change this situation. We can increase our trade much more and fix the trade balance," Ruhsar Pekcan stressed during the online opening ceremony of the Turkey-Indonesia Virtual Trade Delegation organized by the Turkish Exporters' Assembly (TIM).

Indonesia is the world’s fourth most populated country with over 273 million people. Despite the geographical distance, Turkey can export much more to Indonesia, she underlined.

"We trust our production, export potential and competitive capacity," she added.

Pekcan also said the two countries are continuing discussions virtually to create a free trade area between Turkey and Indonesia.

Touching on the coronavirus pandemic, she said it continues to affect the global economy and Turkey is unfortunately seeing a second wave like several European countries.

"On the one hand, life has to continue for the welfare of all of us. For the improvement and development of our country, production and exports must continue," she added.

In this process, the government supports exporters with online trade delegation organizations, she said.

Since last May, several online events were organized and 600 Turkish companies gathered with 1,600 foreign firms, she noted.

The minister said in the coming period, virtual promotion activities will continue.

Ismail Gulle, the head of TIM, said trade volume between Turkey and Indonesia in 2001 totaled $235 million.

He added that Turkey’s exports to Indonesia in the first 10 months of 2020 totaled $183 million.

He said Indonesia has a number of high standards for imported goods, implementing protectionist policies. 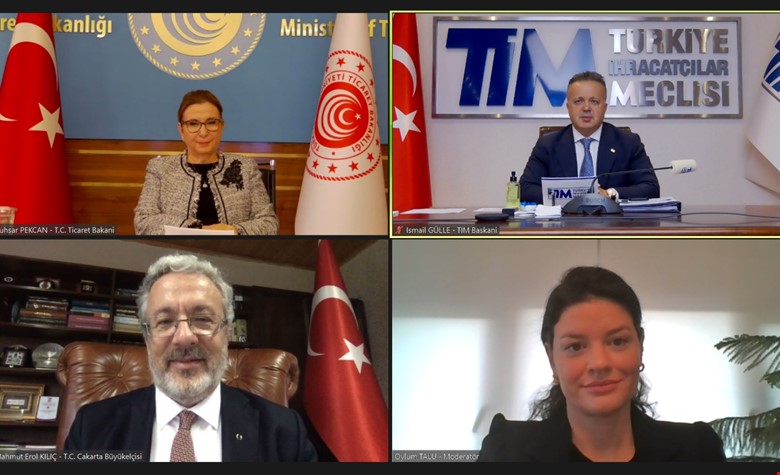